I’ve been roasting with the Behmor for quite a while now and I have my manual profiles dialed in.  This roaster can produce really excellent results provided you accept, and work with the quirks of the thing.  I’ve had the opportunity for a wide variety of coffee folk to taste my coffee from the Behmor and they all are amazed by it.  So, here’s the 3 main things you need to know.

First – Unattended mode (Err7).  I’ve met, and talked to Joe Behm at NY Coffee Fest, and it’s humorous to hear him go off on people that complain about and/or ask why there’s no audible beep or anything letting you know this timer is about to trash your roast.  Frankly, as an engineer myself, this is a classic example of letting an engineer define usability.  This feature is added purely as an insurance thing, which I find no fault with.  But, it’s implementation is massively short-sighted…and Joe knows it.

But, it’s part of the thing, so my advice is just deal with it.  Set a timer for yourself so you don’t blow it.  My bigger complaint about this feature is that the only buttons that work to tell the roaster “I’m here” are C and START.  My manual profiles have a step that is within 30sec of when the feature kicks in.  The damn thing should be smart enough to detect that I just changed the drum speed, or power and kill the Err7 timer.

Second – Cooling.  It sucks balls.  I saw Joe get into a pissing match on Facebook with someone that said a roast should be cooled in about 4 min.  Joe laid into the person asking what evidence he had, and what his credentials were for such a claim.  Joe was clearly being an ass about another short sighted element of his roaster.  His default response now is “just open the door”.  That’s fine if you are in a location that can accept the chaff tsunami that will come out.  But, frankly if you don’t open the door, you will bake your roast…so, again…just accept the fact you will have to vacuum, and open the door.

Third – Batch size.  The roaster is advertised as a one pound roaster.  And, it can roast a pound.  But, in my opinion, the roast time for a pound is simply too long.  I believe roasts should not go longer than 15 minutes.  And, the Behmor takes between 18 and 22 min to roast a full pound.  The upper limit of practical batch size for me is 272gr.  This yields 1/2 pound of roasted coffee.  Now, another caveat with this point is that if your line voltage is bad, you are going to have a tough time roasting 1/2 pound batches too (you might need to look into a Variac device.) 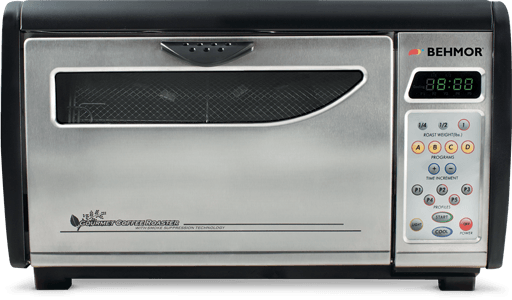 The Behmor 1600 Plus (and original model) claims to be the only full pound home coffee roaster.  That’s not 100% accurate, but it certainly is fair to say it’s the only full pound roaster for the home at it’s price point.  However, if you search the internet you will find plenty of folks that say it’s not really a 1lb roaster.  The sweet spot seems to be about 270 grams, which is just over 1/2 pound.

So, what’s up with that?  Well, it’s not that much of a mystery actually.  It’s an electric device, and as such it’s highly influenced by your line voltage.  So, before you pick up one of these, check your line voltage where you plan to plug this device in.  If it’s below 120V, at 100% power, you will have a lower temperature than if you had a full 120V.  And, in that case, you will want to roast less than 1lb batches to keep your roast times in check.  However, the folks at Sweet Maria’s have a YouTube video that show a brand new Behmor roasting a 1lb batch to 2nd crack just fine.

Let’s get the negative stuff out of the way first.  It’s not much, but there’s some significant things to be aware of.

It’s a drum roaster, but you have to remove the drum to load/unload the beans.

Commercial roasters are by and large of the drum variety.  You’ve seen them before.  You load the beans via a funnel in the top, and open a hatch at the bottom to drop the roast.  Not so with the Behmor 1600.  This makes the loading/unloading more of a pain in the ass than it should be.  It also means that cooling is not as efficient as it could be because the beans are trapped in the drum until the entire thing can be removed.

Because the drum is “sealed” there’s no easy way to get a thermoprobe in there if you want to do your own external logging.   And, the internal thermocouples (which you gain access to if you enable manual mode) are not available without major hackage.  You can run a wire probe in the door as you close it and get ET fairly easily.  You can also stick a probe into the exhaust vent, but that won’t really read anything substantial until the afterburner kicks in at 7:30 into your roast.  But, the actual bean temp…the thing that really matters, is exceedingly difficult.  Some folks have drilled holes in the side of the chassis as well as the drum bearing and pushed a bent probe in that way.  But, that’s clearly going to void your warranty…and it’s not simple.

Home roasting devices like the FreshRoast will cool the beans in the chamber in 90 seconds (sometimes even faster).  The Behmor 1600 cooling cycle depends on the batch size, and can be as long as 12 minutes.  That’s going to result in baking the batch, which is bad.  There’s hacks like opening the door to cool it faster, but that blows chaff all over the place.  And, the manual emphatically says do NOT interrupt the cooling cycle to take the drum out for manual roast cooling.  Apparently, the cooling cycle is needed to help the machine longevity.  It seems that a large majority of the advanced user, however either ignore that, and stop the drum, or just open the door and blow a fan into the device interior.  Of course if you choose the later method, you will blow chaff all over the place.

This is a “safety” feature, but it’s a royal pain in the ass.  It will automatically shut down the roaster into cooling mode, and destroy your batch if you aren’t paying attention.  It’s designed to compensate for the fact that people are stupid and will walk away from the roaster.  If you do that, you risk the beans catching fire on dark roasts.  So, at 75% of the calculated roast time, you have to be there to press “start” to signal to the machine you are still there.  However, it’s really easy to “be there”, working with the roaster and looking at your Artisan plot (assuming you wedged a thermoprobe or two in there) and miss that bit.  What they should have done is added an automatic reset to that trigger for manual mode.  If I press a power change button, I’m clearly there…so push that timer out a bit.

If you just want to have better coffee at home and stop buying either stale crap, or good be expensive micro roasts, the automatic modes of the Behmor 1600 Plus are pretty basic (unattended mode aside).  You just push the batch size button and “START”.  If you want to play with profiles, you can play with those as well.  If you follow the instructions, you will have good coffee.

For most home roasters, the stated 1lb batch size is plenty big to feed your caffeine needs.  Even if you have to do 1/2lb batches due to desired profiles, or line voltage or whatever, that’s double what a FreshRoast is capable of.

The entire reason for the “Plus” moniker is the manual capability of the new control panel.  This isn’t a commercial roaster, but you have control over heat (0, 25, 50, 75, and 100% power) and 2 drum speeds (slow and fast…fast replicates the effect of increased air flow).  You can craft a pretty well thought out roast profile once you learn to anticipate the response time of the heater.

If you already have a 1600, you can upgrade it.  You purchase just the new Plus control board, and install it yourself.  That’s a pretty cool support feature for Behmor to have provided their existing users (I hope they do that again when the connected 1600 is released).

You can pick this roaster up for $349 from Amazon and if you are a Prime member, you can be roasting coffee 2 days from right now.  If you have a serious coffee habbit, this, or any home roasting device, will pay for itself in no time because quality green coffee is a fraction of the price of what good 3rd Wave roasters will charge.

Do I really need to explain this one?