If you can take the hipster overload of New York’s East Village and you need a fix, take visit to La Colombe on Lafayette St.  The SoHo location is tiny…maybe only space for 10 people.  But only a few block North, the NoHo location is significantly larger.  But, is the coffee good?  Well, it’s not bad.  It’s not “holy shit, stop the presses” good, but if you need caffeine, and you are in the area, you could certainly do worse.

The East Village is loaded with small shops. There’s probably 10 spots in between the to La Colombe locations alone.  I was there on a brisk February morning, and all the places were packed…probably because it was 30 degrees outside.  The line in the NoHo location was completely around the bar and there was a steady stream of people in an out.  The music was a bit loud, but the staff was very friendly, and the service was quick.

If you like what you taste, you can purchase the coffee there at the shop or on their web site.  The Nizza blend was what they were serving for espresso based drinks.  It had hints of caramel as described in the tasting notes and the cappuccino I had was creamy and had the correct proportions of milk foam and coffee.  So, as I said, you could certainly do worse than La Colombe.

I find myself back in NYC for an extended length of time again, and once again, am searching for reasonable espresso.  My current routine has me frequenting the area around 8th Ave and 37th.  It just so happens, there’s a place on 38th.

I checked out Ramini Espresso Bar on the recommendation of Google Now based on my location, and it was not bad at all.  The service is friendly, and the coffee (the most important thing) was fine.  It wasn’t mind blowing, but for $4, you get a perfectly fine latte.  If you are near 37th and 8th, and need a fix, this place will do.

The blond barrista was nice enough had the rock-n-roll thing going on, but community and great coffee…not so much.

The location is a tiny, tiny, shack thing oddly placed in the driveway of a larger business area with absolutely no place to hang out or gather.  Even with Google maps directing me, I had to make a u-turn because I drove right by it.  The place, from what I could see inside was also pretty messy.  I can overlook that for the most part, but, c’mon, wipe down the machine and bits every once in a while.

Now, the coffee.  Well, I ordered an iced latte. The barrista turned around, grabbed a portafilter, engaged it, and hit a button.  I was expecting a quick cleaning flush, but to my amazement, coffee started pouring!  Really?!  No fresh grinding?  How long had that portafilter been sitting there?  Was it even warm from the last use?  At the fine grind espresso requires, coffee will go rancid in a matter of minutes.  Then, I started counting.  The double shot rocketed out in about 15 seconds.  15 seconds.  I can’t tell you if it was the grind, the tamp or the dose, because none of that happened in front of me. But, I can tell you the iced latte sucked pretty badly.  I didn’t even have to taste it to know, but I did anyway.  The coffee was bitter and nasty, and really thin.

Maybe I’m a coffee snob, but, San Diego is rapidly becoming a “brewing” mecca.  The beers here are world class, and in North County specifically, the coffee is really having a renaissance with places like Cafe Ipe/Revolution Roaster, and Lofty Coffee Co.   Mediocrity slips by for a while, but plain bad product won’t do you any favors.

The corporate franchise guys might want to check in on this location, because they aren’t living up to the brand ideals.  And, now, this place makes my list of places to avoid.

Koffi in Palm Springs started in 2002 according to their web site with the manifesto that “Palm Springs Deserves a Coffee Destination as Unique as its Community.”  They now roast their own beans (which you can buy if you like) and have a roast to order program.

The shot I had was what they call the Milano style roast.  In other words, properly roasted.  They also offer “Seattle Roast” which seems like a way to woo Starbucks fans.  The shot was not out of this world, but it was a decent one.  I watched as the barrista used a Mazzer grinder to dose what looked like at least 20 grams.  The shot was timed at 28 sec on what I believe was a Synesco Cyncra machine. 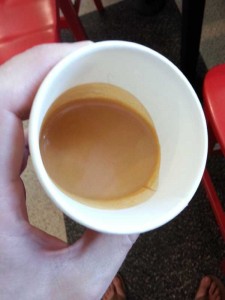 The pour looked very nice with plenty of crema,  The taste was a little thin, but not bitter, with a hint of sweetness.  There was zero aftertaste.

They only pour doubles, but at $2.50, it’s hard to complain about that.

A California company has so far provided the best shot I’ve had in New York.  The location I visited was in the lower level shopping concourse of Rockefeller Plaza.   The shot was the most expensive I’ve had here at $3.60, but is was so significantly better than anything else I didn’t mind. 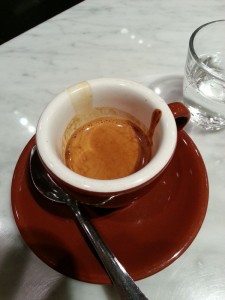 The shot was brewed on a shiny La Marzocco Strada.  I watched it pour and it looked beautiful from the beginning.  The crema was a nice golden color.  It smelled sweet and tasted of dark chocolate with a sweet finish.

After previously having a mediocre latte at the Illy sponsored Rieu Cafe in the Sony plaza in the morning, this was definitely a great way to start the afternoon.

New York certainly has no shortage of foodie heaven spots.  On a recent trip after my new found coffee obsession (I actually spend a reasonable amount of time there due to my sons acting career) I started with a simple Google search for “coffee” near my location.  The obligatory swarm of Starbucks locations showed up, as well as a small hole in the wall with pretty good reviews called Lucid Cafe.

Lucid Cafe is located at 311 Lexington Ave (Southwest corner of 38th st) in Manhattan.  There was lots of construction and I nearly made the mistake of assuming it was gone.

It is a tiny hole in the wall with maybe room for 10 people to stand.  So, this is not a place you will come to hang around and connect to WiFi.  There were only 2 people behind the counter. 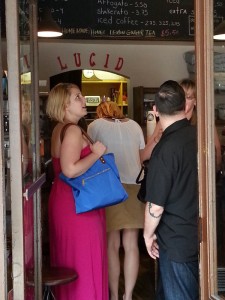 Their machine is a very nice (but smaller) looking La Marzocco.  And, all shots are doubles.  They appear to be using Counter Culture beans. 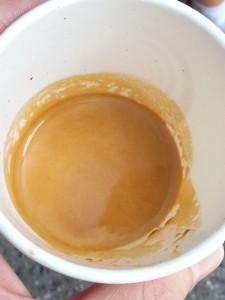 My shot was very, very good.  The crema was thick with a nice dark golden color.  There was a spice note to the aroma and taste that I’ve not experienced before, but it was really nice.  The final sip was sweet and fruity with that spic note still present.  At $2.75 for a double shot of very good quality, I will be back to try lattes and cappuccinos.

After hearing about the “revolution” going on inside Cafe Ipe in North County San Diego, I finally stopped by to sample the results. The shot I had wasn’t perfect, but it was close.  It was food enough to understand the quality of the beans being used.  The barrista was happy to share that he was dosing 18 to 20 grams for the shot, and it was thick and yummy. The blend they use in their shots is what they call Smooth Operator and is roasted on site by Revolution Roasters.  It is damn good, and the bag I bought was roasted the day before.  When I got it home, in had to make a minor adjustment to my grinder, but the first shot I pulled from my Delonghi EC155 was so freaking good!  The crema was thick, golden and sweet. I love the fact that this is roasted essentially right down the road from my house and it’s all the buzzwords you want… Fair trade, etc.

A few weeks later I stopped by while they were roasting and talked with Dan, the owner for at least and hour.  He was happy to share tons of info on his roasts and reasoning for his roasts.  Since then, I’ve tried 1 other roast, Surfing Madonna’s Elixir.  It wasn’t as good as Smooth Operator for espresso, but it was still very good.

I just had the best espresso yet today courtesy of Lofty Coffee Co. in Encinitas.  The shot was delicious, thick, and had not one hint of bitterness.  It actually almost tasted  like liquid dark chocolate.

Lofty is a small, very busy place on the Pacific Coast Highway in Encinitas.  If you are there in the mornings, be prepared for a line out the door.  They also have a selection of food that looks pretty good, but I’ve never eaten there…I’m here for the coffee. After deciding to get good at making espresso and espresso drinks myself, I now have a new standard to aim for when making the best espresso at home.

Of course, being the geek that I am, I immediately came home and changed the grind and tamp on my meager De’longhi EC155 to get closer to what I had just tasted.  And, it worked.  3 shots later, and I had something very very close to what Lofty had given me.

I’m sure there are other great places in San Diego, but Lofty is now on the top of my list for places to beat.